Yesterday was my roommate Anna's birthday, so we had some people over for homemade pizza and birthday cake. 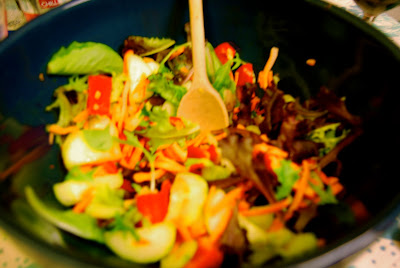 {Emma made a gorgeous salad}
You might recognize Anna from her comments on the last post about my early morning baking habits (she comments as Banana).
Her room is right off the kitchen, so I'm learning to keep those habits in check.
I'm pretty sure she still likes it when I make biscuits, though. 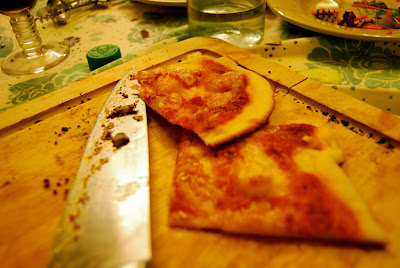 Anyway, her birthday celebration was low-key, but so, so, much fun. 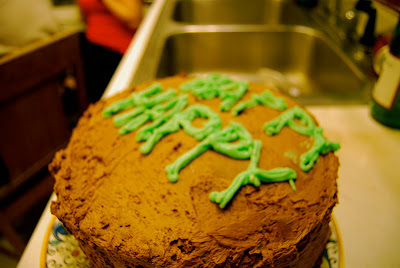 I highly recommend homemade pizza and yellow cake with chocolate frosting for birthdays. 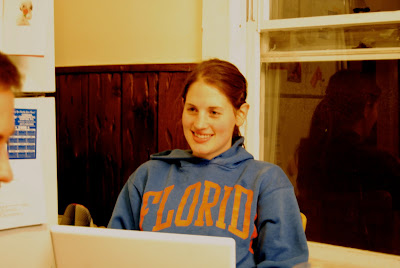 Happy Happy Anna!
(Your birthday post is forthcoming)
Posted by AbbieBabble at 7:46 AM 10 comments:

On Saturday mornings, I wake up before all my roommates.
If I am feeling ambitious, I go for a run. If not, I read the internet in my pajamas. 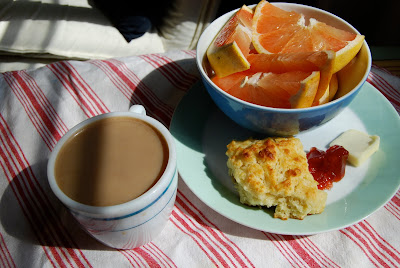 Either way, by ten, I am downstairs, making biscuits and coffee.
After the baking dishes are cleaned up, I start my day, or sometimes, I just curl up and read a book. 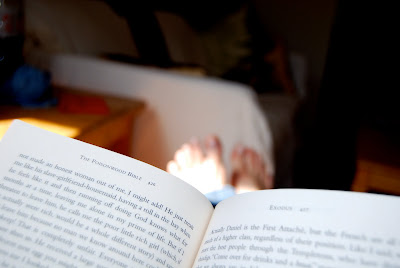 Saturday mornings are my favorite part of the weekend.
Posted by AbbieBabble at 7:20 AM 17 comments:

In which I ask for book recommendations, yet again. 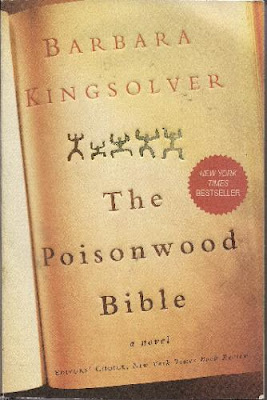 Happy Friday, everyone!
It is disgusting here today. Yesterday it was in the sixties, and today it is snowing. Snowing!
I do not want to go to work today. I just want to stay at home and bake and drink tea and read all day.
Unfortunately, I don't think my boss would really like that plan, so instead I'll read my book on the bus ride into work. Right now I'm reading the Poisonwood Bible. I like it a lot.
How about you? Reading anything good this weekend?
{Image borrowed from Amazon}
Posted by AbbieBabble at 7:43 AM 14 comments: 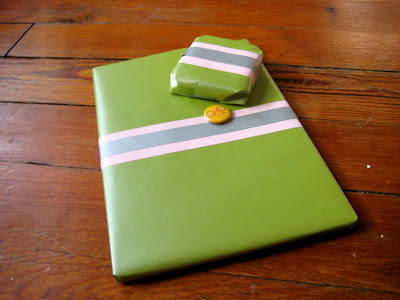 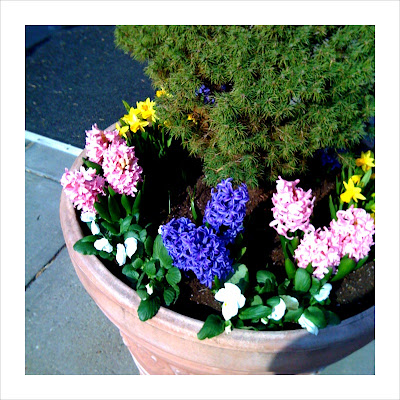 Things that made me happy:
A new iPhone, and the CameraBag ap.
A (mis)adventure to Newport with the bestie.
First flip flops of the season.
Corned beef and flip cup. (Really, I am very mature.)
Hyacinths.
Working some things out.
Sunday night potluck.
Late night roomie conversations.
Oh yeah, and Health Care.
It was a good weekend.
Posted by AbbieBabble at 6:49 AM 13 comments: 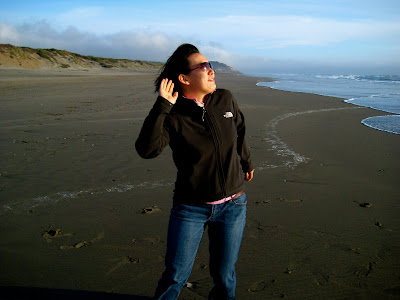 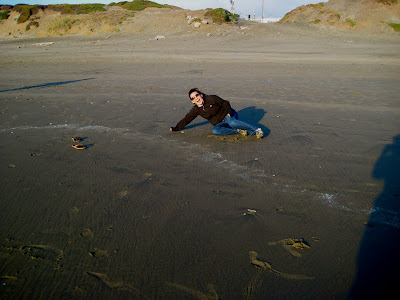 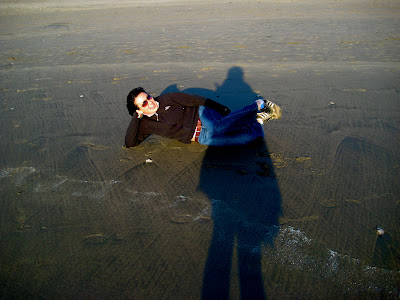 {Ocean Beach, San Francisco, Easter 2009}
Deep in my heart, I believe Sinny's Birthday is in May.*
Unfortunately, it is not. It is in March.
Oops.
Anyway, without further ado, I love Sinny for lots of reasons. Like:
1. Sinny is the warmest, most genuine person you will ever meet. I don't think she has ever met a person she doesn't like, and she makes friends faster than you would believe, in any situation.
2. Sinny gives the world's best hugs. One of her hugs will make even the worst day better.
3. Do you have an adventure you've been dying to go on? Tell Sinny about it, and she will get as excited about it as you are, and then figure out how to make it happen. Last year's Fourth of July camping trip? All Sinny. Same goes for Bourbon and Branch outings, apple picking and countless other adventures.
4. Sinny's passion for food is rivaled only by her passion for helping people. This girl is an amazing cook. Seriously amazing.
5. Sinny is in med school right now, and when she gets out, she is going to be the kind of doctor everybody hopes to have. The kind who treats every patient with such care and genuine love, they are just bound to get better.
6. Sinny was my SF BFF. She was the one who picked me up at the airport when I moved to San Francisco, the one who gave me a place to stay while I was homeless, the one who listened to me cry when I felt like this. I can honestly say that knowing Sinny was there to catch me was what made it possible for me to up and move across the country last year. I will always be grateful for that, and I hope she knows I'd do the same for her in a heartbeat.
Happy Happy (belated), Sinny!
I'm so glad you were born.
*Seriously, when facebook told me her birthday was last week, I made a mental note to tell her that facebook had her birthday wrong.
Posted by AbbieBabble at 11:54 PM 8 comments: 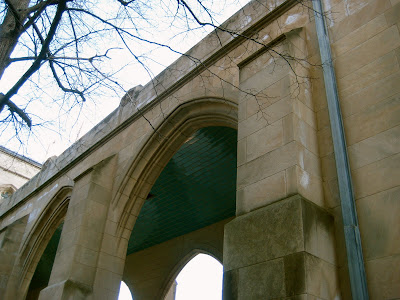 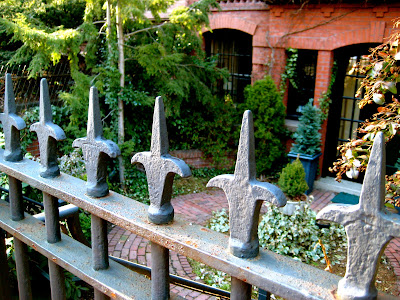 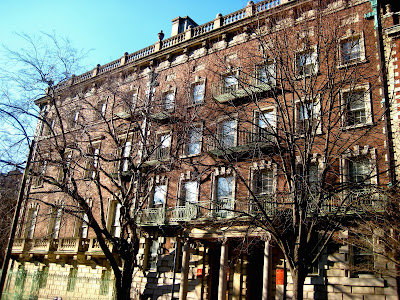 A couple of weekends ago, my mom and I spent a Saturday afternoon walking from Cambridge into Boston, and then we walked around BU and the Back Bay.
Although it's pouring as I type this, and the wind is blowing so hard I'm a little worried I'll wake up in Oz, looking at pictures from that walk give me hope that Spring really is coming. I can't wait.
Posted by AbbieBabble at 12:26 AM 10 comments:

This is Loren.
Loren has been one of my best friends since high school (she, Emily and I were Three Musketeers), and today is her birthday.
I love Loren for lots of reasons. Some of them are:
1. Loren is on of the most level-headed people I know. Just being in the same room as Loren instantly makes me calmer.
2. Loren has found a subject about which she is passionate, and has completely immersed herself in it. Last summer, she even went to Uganda to work for the World Food Programme.
3. Loren can always be counted on to indulge our mutual love of all things pink and girly.
4. Loren brings people together. Our group of friends, who are still close to this day, did not really form until Loren came to Commonwealth in eleventh grade.
5. Loren can always get enthusiastic about a party. When she's around, there will be dancing and delicious food and beverages.
6. Even though we didn't get together that much last year, just knowing that she was down in Palo Alto, a train ride away, made me feel so much more settled in San Francisco. Those times that we did get together, those trips to farmer's markets and coffee shops, were some of the highlights of my time in California.
Happy happy, Loren!
I'm so glad you were born.
Posted by AbbieBabble at 2:27 PM 1 comment:

Sometimes, I have little freakouts.
Ones where I decide I can't do anything. I'll never amount to anything. I suck at life.
Today, I asked Emily what I was good at. She said:
"i think that you are good at dealing with small children, caring about your friends, being passionate, and making pavlova."
I do not think she realized that she described exactly the person I want to be.
Sometimes, having a best friend is the best thing in the world.
Posted by AbbieBabble at 12:19 AM 12 comments:

On Saturday, I went with my mom and her friend Nava to visit my sister at college.
Northampton is a really great town, full of really cool stores and and of course the beautiful Smith campus. We lucked out and had the most gorgeous weather for our visit- I didn't even wear a coat!
Mostly, though, it was just really nice to see Dewey and her friends and her school, and to hang out with my mom.
It was a pretty perfect Saturday.

Last Sunday, Cait invited me over for a little tea party in her gorgeous apartment.
We made scones and ate them with devon cream and jam. Then we sipped tea (Harney and Sons Paris Blend is the best for a tea party) and chatted on Cait's comfy brown couch. Then we ate some more scones.
I highly recommend a Sunday tea party. It's such a relaxing little tradition.
Posted by AbbieBabble at 12:30 AM 11 comments:

I am obsessed with the light in my room in the morning time. It's so bright, it wakes me up at 6:30 most days (I still don't have curtains), but it's so lovely, I don't even really mind.

I just want to take pictures of it.
Posted by AbbieBabble at 1:01 AM 9 comments:

Labels: my bed, my house, photography

On Saturday, I met up with Nithya for a trip to the North End. After filling ourselves with pizza and espresso, we wandered over to Polcari's on Salem Street, where I got the most delicious coffee for the week, and where they were extremely accommodating to a baby photographer who just wanted to take pictures of it all. 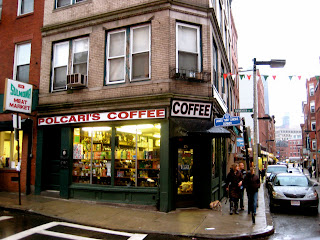 {I have memories of going to Polcari's when I was tiny tiny. They had candy.} 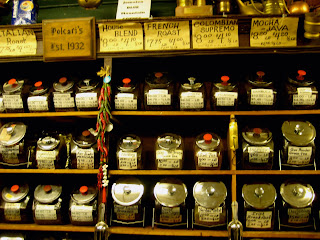 {They have approximately seven hundred thousand kinds of coffee.} 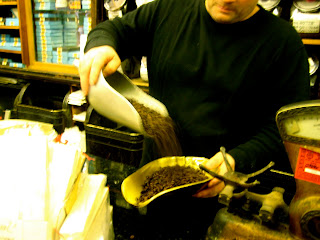 {Which they custom blend for you} 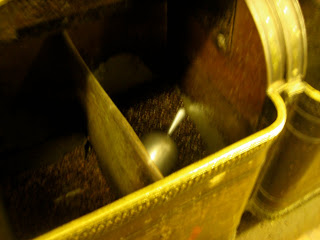 {The guy pulled me behind the counter so I could take pictures of the big bins. I couldn't really get a good shot, but I thought that was so sweet!} 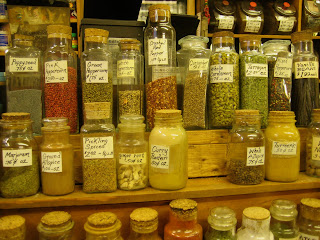