Sometimes I wish I were a three-year-old boy

Or, at least, that I had one readily available.
Today would be one of those days. See, on Friday, we realized that our plumbing wasn't working quite right; whenever you did a load of laundry, the water backed up into the basement sink. It was kind of weird. So we called the plumber.
After spending ALL day at our house yesterday, the drain guy determined that we needed an excavator to dig out the sewer. Or something.
This morning I woke up to lots of "beep! beep!" sounds, of what turned out to be a backhoe backing up. Or maybe it was some other kind of truck. (By the way, I would never ever ever recommend getting the stomach flu on a day when your house happens to have no plumbing. It ain't pretty.)
But anyway, today we had all sorts of really cool construction trucks plus a REAL LIVE policeman on detail, all in front of our house, digging holes in the ground so that we could flush our toilets. This is vaguely cool if you are a twenty-two year old at home in bed with the flu. If you are a three-year-old boy, however, life just doesn't get any better than that. So I wished I knew some who lived in Cambridge. Unfortunately, my stash of three year old boys is currently in Hanover.
Oh, well.
Posted by AbbieBabble at 4:23 PM No comments:

Hearty and Delicious. That is what I am.
Actually, I think that it is kind of distasteful to use food adjectives to describe people. Lentil soup, on the other hand, IS hearty and delicious. And the other day, I made some.
I started out by chopping up some carrots, onions and garlic: 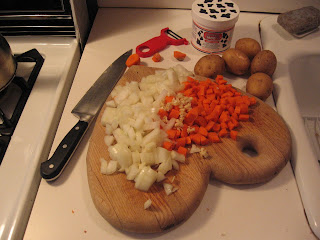 (I also peeled some potatoes and cut them into half-inch chunks, but I didn't take a picture of that.)
Then I cooked some bacon in olive oil in a big pot, and added all the vegetables to that: 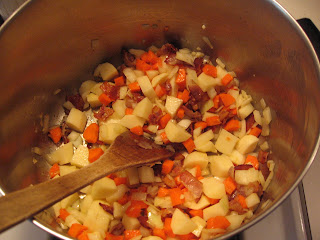 Once the onions were soft, I measured out a pound of lentils (posing with the chicken broth that is going to be added in JUST A MINUTE! Isn't cooking just so EXCITING?) 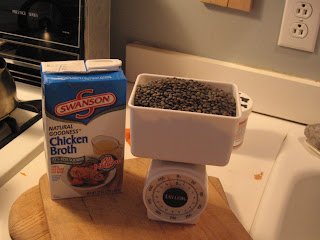 Then I added the lentils to the veggies, and poured in the chicken broth. ACTION SHOT: 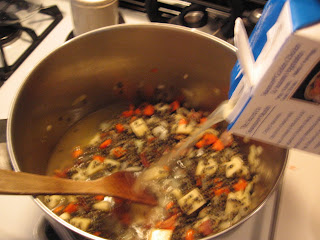 Then I let it cook. And it looked like this: 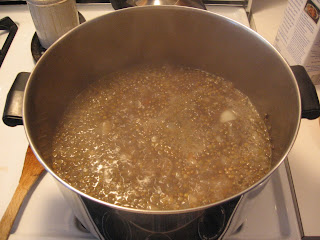 I decided that I like my lentil soup thick and stewy, so I added an three-quarters of a cup of lentils. This was a mistake, as now I need to add water to the soup every time I reheat some. I also whirled the soup with a stick blender to make it thicker and stewier. This was not a mistake.
Also, I cooked some collard greens and served them with the soup. That also was not a mistake. It was delicious.
Eating this many green beans in one sitting is, however a mistake. And that is saying a lot, since I love green beans. 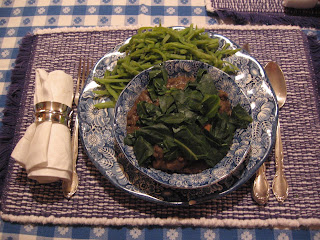 You can find the recipe for lentil soup here on Epicurious. I love that website. And the internet, for that matter. I added bacon to the recipe, because I like smoky meat in my lentil soup. Next time I might add a little sausage, as well. I also would have added kale instead of collards, but they didn't have any at the grocery store when we went at 11 o'clock on a thursday night.
Posted by AbbieBabble at 11:10 PM 1 comment:

I'm still here, but it's two days before Christmas, and I haven't bought a single present yet! What's a girl to do?
NOT update her blog, is the answer. I have to get shopping!
Updates later, I promise. Including, but not limited to: forging signatures of famous people, my mom's birthday, and lentil soup! I bet you can't wait!
Posted by AbbieBabble at 2:03 PM No comments:

On Kittens and Domesticity 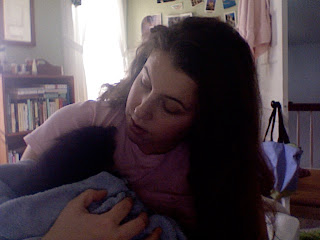 I got home two days ago, right in time for the worst snowfall in a while. We got at least a foot. In BOSTON.
As a result, I spent yesterday trapped inside my house. I used the time quite productively. I made dinner, did laundry, and watched Bionic Woman.
I also noticed that Sooki, our kitten, has yet to fully grasp the concept of cleaning herself. (She has also yet to grasp the concept of not being a huge pain in the ass, but that is another post for another day.)
And so, today, after beginning the domesticity by baking a baguette (it wasn't rock-hard, but not exactly amazing, either), I endeavored to help the cat out. So I gave her a bath.
And you know what? Neither of us died.
I would consider that a success.
Even though she still stinks.
Posted by AbbieBabble at 1:17 PM No comments:

That's It. I am officially crazy. 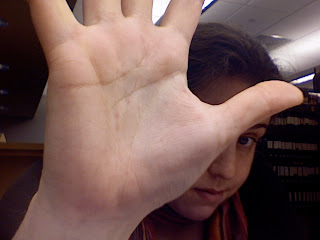 I have officially turned crazy.
"But Abbie," you say, "you've always been crazy. It is one of your many multitudinous charms!"
That may be so, but NOW, now I've turned into one of those people who talks about their health all the time. Even in their blog.
Here are the ailments that have afflicted me in the past three weeks:
-MRSA
-Weird Cold Thing that had no cold symptoms but did come with a truly attractive swollen neck and a fever that made me think the MRSA was killing me.
And Now:
Strange Spot Disease. My entire upper body, including the palms of my hands, is covered in itchy red spots.

And it's all I can talk about. Maybe I'll take a break from posting and come back when I have something actually interesting to say.

EDIT: James requested a picture of my spotted hand. This is the best photobooth + the library light can provide. I swear it's worse than that in real life.
Posted by AbbieBabble at 3:47 PM No comments:

Labels: I am strange, sickness

I am currently sitting on my bed, an open pizza box by my side, my abnormal psych textbook open to the substance abuse chapter, my computer blasting Holly Near. And I'm wearing sweatpants.
Oh, finals, what did you do to me?
Posted by AbbieBabble at 10:16 PM No comments:

Makes Me Wish I Was Five

Remember Quints dolls? You know, the five tiny little baby dolls? All their accessories were stuck together, so you got a carriage built for five, or a highchair built for five, complete with five spoons stuck together?
They were awesome.
Anyway, I just discovered this on ebay.
And part of me wants to buy it.
I'm trying to resist.
Really hard.
Posted by AbbieBabble at 8:22 PM 1 comment:

Oh, Finals, you have come again.

Today, instead of doing laundry, I went to the Gap and bought six pairs of socks. Given the fact that they seemed to be running out, I suspect that I am not the only person who's been doing this.
Posted by AbbieBabble at 7:54 PM No comments:

So, last night, I didn't fall asleep until about 2:30 (and that was only after taking Nyquil and curling up in my papasan chair with the extremely soporific December issue of Vogue magazine).
Why, you ask?
Because I thought I was dying.
Now, anyone who knows me knows that I am sort of a huge hypochondriac, and I often think I'm dying. But this time, I had a legit reason to be scared: I have MRSA, a medication-resistant staph infection. While all of my spots were healing, one of the first signs that MRSA is in your blood is if you get a fever. And I had a fever and nasty swollen glands, but no sore throat, so it was unlike any cold I'd ever had. So I was kind of scared.
This morning I went to the doctor, where I told them that I had MRSA and a fever, and they pushed me up and gave me a REAL doctor, not a physician's assistant or a resident. She took about five seconds to look at me and tell me I had a cold. And that I should keep taking nyquil.
I personally find the details of other people's health kind of boring, so let me apologize for sharing here, but when you are afraid that you are going to die, or at least be in the hospital for a couple of days, it's really nice to find out that all that's really wrong is that you have a cold.
Posted by AbbieBabble at 8:03 PM No comments:

Remember how I hate writing papers? Well, guess what I have to do for tuesday at 6?
That's right! My most favorite thing of all. Except this time, I have to have ten pages. Not a measly five, which I can totally handle. Nosirree. Not for this class no way. I have to write ten pages about education in Micronesia. Aren't you jealous? 'Cause I would be.
I have a paragraph. That is a start. Unfortunately, though, I also have a fever. Boo.
Posted by AbbieBabble at 10:03 PM 1 comment:

Remember How I Liked My Hair? I Lied. 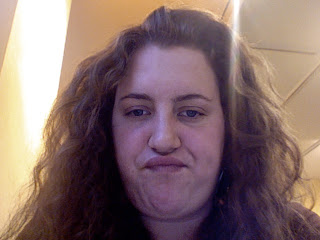 You know, as soon as she brought out the texturizing shears, I got wary. Very wary. See, my hair is two things: it is incredibly frizzy, and it's incredibly poufy. All on its own. Without someone cutting little pieces off at random to "open up the curl and give your hair some shape." So now it is poufy. Extra poufy. With a side of frizz.
I still have some sort of idiotic faith that if I find the right product, it will get better. I'm losing that faith, though.

Don't y'all love it when I talk about my hair? Doesn't it just fill your hearts with gladness and your minds with interest?
Posted by AbbieBabble at 3:08 PM No comments:

I so am that person

I got to this cafe at 11:30.
I have gotten up from my chair to:
pee
talk to my dad when he called
order lunch at the cafe (I ordered my breakfast before I sat down)
order a slice of cake
I can totally do this. It's kind of fun, this working all day and night thing.
But I think the cafe people think I'm creepy.
Posted by AbbieBabble at 5:04 PM No comments:

Labels: I am strange, pee

So, one of the reasons that I've decided that I need a new digital camera is that the LCD display on mine broke. I could look at pictures I'd already taken, but I couldn't use it to set up a new shot. It was very strange and mysterious.
Last night, someone was using my camera to take a picture. I explained the problem and that she would have to use the viewfinder.
"Nope. I fixed it!"
"YOU DID? HOW?"
"I pressed the 'display' button and the display showed up again."

Technology is so very tricky.
Posted by AbbieBabble at 12:48 PM No comments: