It's finals. I'm not being very productive.
Actually, I'm not being productive at all. I have a fourteen page paper due tomorrow at 8 am. I have just under two pages, and the rest outlined.
I am not nervous about this. At all.
I did, however, just realize that this push to get work done? It's not just a push towards the end of the term. It's a push towards the end of college.
That's some scary shit, right there.
Posted by AbbieBabble at 4:58 PM No comments:

I would write my essay, but I'm too busy trying not to walk over and munch on some baby legs

There is a baby in the cafe where I am working.
I do not know this baby or her mother, but she is maybe the cutest baby EVER.
It is tres difficult to write a paper on mate choice in songbirds when you are exercising restraint in not chomping on the feet of a strange baby.
Posted by AbbieBabble at 12:42 PM 2 comments:

Sometimes this Education thing is fun

It's reading period here, which means that everyone's studying their little hearts out to prepare for finals, unless you only have final papers, in which case you're reading and writing your little heart out to prepare those.
I only have final papers this term.
One of them is in my elementary education class.
I spent the afternoon reading Newbery Medal-winning children's books.
FOR MY CLASSES.

Sometimes, this teacher education thing is pretty sweet.
Posted by AbbieBabble at 9:30 PM No comments:

Five-Year-Old: Abbie, What are you going to be when you grow up?

Me: That's a good question. What do you think I should be when I grow up?

Five-Year-Old: A botanist. [NOTE: Her mother and I were just talking about her aunt, who's a botanist]

Her Three-Year-Old Brother: A teenager.
Posted by AbbieBabble at 6:09 PM 1 comment:

Presentation due in four and a half hours.
Have not yet created said presentation.
Have done too much research.
Does that count for anything?
Posted by AbbieBabble at 9:33 AM 1 comment:

I am in Sanborn library, since all my other study spots were already full by the time I got to the library at 11:30. This is fine; I love Sanborn, and it is my favorite place to study. This would have been my first choice for studying today, too, except that I plan to be up late tonight, and Sanborn closes at midnight, a full two hours before the rest of the library.
Also, today, Sanborn smells like dog pee.
Posted by AbbieBabble at 12:00 PM No comments:

So, several times in the past few weeks, I've had conversations with people where they have discussed, in all seriousness, people who "just aren't very smart."
Every time I hear this, it shocks me. What about the fact that everyone is smart, just in different ways? It's a pretty well-established fact, isn't it? I mean, I know that in some ways, the theory of multiple intelligences seems like a way to make people feel better about themselves, but if you think about it, it makes sense. It really does. I truly believe that everyone has something that they're really, truly good at. For many people, that thing is not school. But that doesn't mean they're not smart. They're just different.
I'm elitist about many many things, but my intelligence or lack thereof, and that of the people around me, is not one of them.
Posted by AbbieBabble at 8:54 PM No comments:

So, I'm taking this class on Neuroethology, which is basically the combination of neuroscience and animal behavior. It's really interesting, and I'm quite a fan of the course, which is surprising because I haven't really studied neuroscience before.
Anyway, I have to write a paper for this class, and I'm writing about how female songbirds choose their mates. I'm doing a ton of research, and I just read an abstract that says the following:

The songs are constructed from smaller units called syllables, and special syllables with a more complex structure (sexy syllables) are known to induce females to perform copulation solicitation displays (CSD) as an invitation to mate. By using computer-edited experimental songs, we first show that females discriminate between songs by producing significantly more CSD to those containing sexy syllables. We then sectioned the brains and used in situ hybridization to reveal song nuclei containing androgen receptors. We report positive correlations between the size of HVC and both total CSD response and the amount of discrimination between sexy and nonsexy songs.


(Emphasis mine, From Female canaries that respond and discriminate more between male songs of different quality have a larger song control nucleus (HVC) in the brain by Stefan Leitner and Clive K. Catchpole)
Sexy songs? Nonsexy songs? In FINCHES?
These scientists are nerds.
Posted by AbbieBabble at 11:38 AM No comments:

I Need to Get a Life

I just played vulva in Scrabulous.
It was the highlight of my day.
It was JUST SO FUNNY.
Posted by AbbieBabble at 1:32 AM No comments:

Labels: I need to get a life

Emma says I haven't blogged in forever.
Perhaps this is because school suddenly hit me like a ton of bricks. (I almost said "real life" but then I remembered that school is not real life. Not even a little bit. As long as my parents pay the bills, it's not real life.)
My life is boring. I sleep, I exercise, I go to class, and when I'm feeling really ambitious, I go to the library. That's the routine, EXCEPT for this weekend.
This weekend, the sororitee had a formal. Manoli came up. We made out and took pictures: 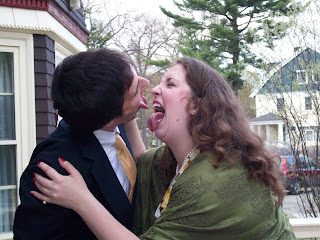 Posted by AbbieBabble at 11:27 PM No comments: