I Wanna Hold Your Hand

The other day, The Girl and I were riding the T home from a playdate. Understandably, once she had finished her snacks, she got kind of bored. Lacking the keep-her-happy-on-the-T toys that usually live in my bag, I pulled out my iPod, which is now home to a Laurie Berkner album. I let her put on the headphones and listen to Victor Vito and B-O-O-T-S, and she was entertained until we had to switch trains.
A couple of days later, we were sitting around after dinner when I had an idea. I got my iPod out again and told her that, if she wanted, we could listen to I Want to Hold Your Hand, the song I always sing to her when we're walking. She liked the idea, so I helped her put the left earbud in, turned the volume way down so as not to hurt her precious baby ears, and started the song. Her eyes lit up as she heard the Beatles singing the words she knows so well, and she started singing along. Then she paused.
"Abbie?"
"What, honey?"
"Is this song about you and me?"

Ben is my driver's ed instructor. His name is short for Benton, which I think is kind of cool. Anyway, he has taught me lots of valuable lessons this past week, including:
-"You must always watch out for pebbles on the road, because you never know when one might fly up and go through your windshield and into your mouth. And that would be bad for your health."
-There are Hidden Hazards on the road. Lots of them. Like Moose. And just because we live in the city doesn't mean we won't run into a moose. And if we do, WE WILL DIE.
-"These drugs [like vicodin] can stay in your system for a long time, and then they can mix with other drugs and BLOW YOUR BRAIN."
-Road Rage is a scary monster. If you are not careful, one day you'll be driving home from work and all of a sudden a nice Baptist Deacon will get out of his car and shoot you with a crossbow. And then YOU WILL DIE. Actually, Ben didn't teach us that. The Road Rage video he showed us did. It was very informative.
-"You must be vewy caweful when you dwive, because if you awe not, you will get into a collision. And that could ruin your life." And then YOU WILL DIE.
Also, he taught me that if you wear the same shirt for four days in a row, sixteen-year-old boys will notice. And so will 22-year-old girls.
Posted by AbbieBabble at 7:18 PM No comments:

I have a week off. I decided to spend it taking driver's ed.
I hate driver's ed, but I must say that it makes for some interesting people watching. Not since I myself was sixteen have I been surrounded by so many sixteen-year-olds, and with them all the cliches of high school.
We have the socially incompetent nerd who interrupts the instructer to point out flaws in his teaching and who can't help but brag about his intellectual prowess. ("Excuse me, but, actually, most of the things in that video are now illegal in the state of Massachusetts." "That's not true." "Yes it is." "Beeping your horn to warn kids who are playing in the street that you are coming is not illegal." "Fine.") (Also: "I know a lot of people (including myself) got 40s on the test, but did anyone get a perfect score of 41?")
We have the short kid who makes up for his lack of height by being too cool for school and wearing his plaid puma baseball cap perfectly tilted and sideways.
We have the cool girl who is all like, Oh My God, why do I have to do this it's a waste of my time! I could be like, hanging out at the mall or something!
We have the punk from the suburbs. She wears those really tight punk jeans and angry sweatshirts and has a nose ring.
And lastly, we have the delinquent 22-year-old who couldn't be bothered to graduate when everyone else was doing it, so now she's stuck in driver's ed with a bunch of people who weren't even born in the same decade she was, proving to them what can become of you if you don't get your license when you're supposed to: you become that lame-ass 22-year-old taking driver's ed with a bunch of high school kids.
That would be me.

P.S. My driver's ed instructor actually said that about Exhaust Systems and DEATH, and then provided us with several stories of local people who died of carbon monoxide poisoning and They Lived Nearby so clearly if you are not careful IT COULD HAPPEN TO YOU TOO. And it probably will. I forgot how morbid driver's ed is.
Posted by AbbieBabble at 11:34 PM 4 comments:

Why won't it go away?

Ugh.
My sore throat is back. Also, yesterday I got a chipper call from the doctor saying "oh, by the way, you didn't have strep! Hope the penicillin helped anyway!"
It did. Until I stopped taking it because I THOUGHT I DIDN'T HAVE STREP THROAT.
Posted by AbbieBabble at 7:01 PM 2 comments:

I didn't tell her about how they hurt like a bitch

I spend a good deal of time these days putting sunblock on The Girl. Whenever we go through the ritual, starting with the legs and slowly working our way to her face, we talk about how we do it so we don't get a sunburn.
Over the weekend I decided to ignore the fact that because I am pale, I tend to burn. Quickly. Instead, I thought I'd get some nice color and deal with my farmer's tan by sitting out in the sun recuperating from strep. Needless to say, I didn't get some "nice color." Instead, I got a "very painful sunburn."
At work today, I told The Girl about how I got a sunburn, and I even let her touch it. As she was gently running her fingers over my lobster-red shoulder, I realized that she had not only never had a sunburn, she'd never even seen one.
Kids these days, eh?
Posted by AbbieBabble at 11:28 PM No comments:

Me: YAAAAAY! one of my favorite bloggers just sold her house that she thought would never sell!
Ben: ..... you need a new hobby perhaps
Me: like what?
Ben: hmm
Ben: something not involving the internet
Posted by AbbieBabble at 10:59 PM No comments:

There are advantages to strep throat 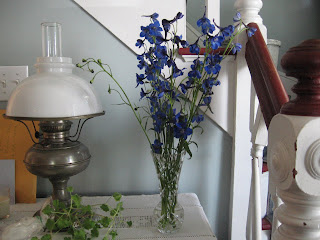 1. You get to spend all day hanging around the house in a t-shirt and underwear.
2. Your mother goes to the corner store to get you coffee ice cream for lunch because it's the only thing you will eat.
3. Your boyfriend brings you lovely flowers.

Mostly, though, I just want to feel better.

UPDATE: I seem to be feeling better! I know you were all worried.
Posted by AbbieBabble at 3:53 PM No comments:

I love working with small children

I have strep throat. And last night at the doctor, I had a fever of 102.2 degrees. It was glorious.
Now, The Girl doesn't seem to have it, but she probably figured out some way to get those germs from one of her little friends and pass them on to me. She is sneaky like that.
Posted by AbbieBabble at 8:21 AM No comments:

Do they really do that?

Yesterday I saw an advertisement for puppies! cute puppies! with a one-year good-health guarantee!

Can you seriously return a puppy? What's next? Returning a baby because it's ugly?
Posted by AbbieBabble at 10:12 PM 2 comments:

A Fourth of July Recap 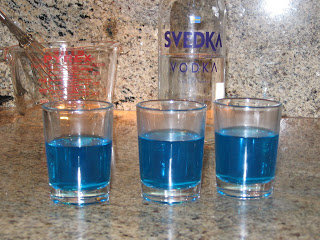 What's the Fourth of July without patriotic jello shots?
Actually, my friends' and my celebration was actually more about the meat: we had burgers, fancy-pants chicken (Ben marinated it in fancy-pants homemade marinade) AND ribs. With doctored-up store-bought barbecue sauce. It was delicious.
Mostly, though, we just hung out, slept a lot, and watched Die Hard With A Vengeance. And then slept some more. And then barbecued the meat.
All in all, a lovely day. And a perfect prelude to a day-long trip to the USS Constitution with 24 5- to 8-year-olds. Which I may write about in a later post, if I ever recover enough to look back on it with perspective.

p.s. Which is worse, having "I'm Not Perfect" by Laurie Berkner stuck in my head, or having "The Princess Pat" in there? Right now, I'm thinking the old camp favorite is far far worse.
Posted by AbbieBabble at 12:10 AM 4 comments:

Labels: food, my day, the fourth of july

Today was a gorgeous day. About 70 degrees, it wasn't too hot or too cold. It was the perfect day to go to my favorite cafe and then walk along the Charles River into town and then sit there for hours, watching sailboats and runners and fancy parents pushing $900 strollers go by and talking about nothing and everything.
So that's what we did.
Posted by AbbieBabble at 7:36 PM No comments: